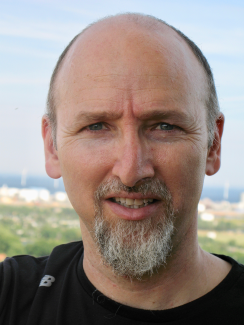 Barry Giesbrecht earned his BA in Psychology from the University of Waterloo (Ontario, Canada). Barry did his graduate work at the University of Alberta (Edmonton, Canada) under the supervision of Drs. Alan Kingstone and Walter F. Bischof and was funded by scholarships from Natural Sciences and Engineering Research Council of Canada (NSERC), the Killam Trust, and the Alberta Heritage Foundation for Medical Research. After receiving his Ph.D. in 1999, Dr. Giesbrecht did a post-doctoral fellowship in the Center for Cognitive Neuroscience at Duke University (Durham, USA) and was funded by awards from NSERC and the McDonnell-Pew Program in Cognitive Neuroscience. In 2002 Dr. Giesbrecht became a part of the research faculty in the Center for Mind & Brain at the University of California, Davis, where he remained until joining the UCSB faculty in July of 2004.

On a moment-by-moment basis we are faced with an environment that is in a continual state of flux, changing over time and space. Coherent and adaptive behavior in this complex environment is supported by the interplay of a variety of sensory, perceptual and cognitive systems. Attention, for instance, provides a powerful coping mechanism that mediates the selective processing of information that is consistent with our current behavioral goals and intentions. The purpose of the research conducted in my lab is to clarify the perceptual, cognitive, and neural mechanisms of selective attention. More specifically, my research uses vision as a model information processing pathway to investigate three fundamental questions about attention: 1) What are the functional consequences selective attention? 2) What are the mechanisms that control the selective effects of attention? and 3) How is selective attention shaped by experience? Although these questions have been the focus of much investigation and heated debate over the years, the vast majority of this work has been focused on the importance of spatial location as a key determinant of efficient selective information processing (e.g., Posner, 1980). My research program, on the other hand, has made novel contributions to the current understanding of these questions by providing a systematic and detailed analysis of the properties of attention that are not strictly spatial in nature. The key to the success of my research program is an empirical approach that combines the experimental rigor of cognitive psychology and multiple measures of brain function (functional magnetic resonance imaging (fMRI), electroencephalography (EEG), and neuropsychology). Using these methods, my work converges on the notion that selective attention is a flexible information processing mechanism that adjusts dynamically to our internal goals and our external world.

Prof. Heejung Kim Appointed Board Member Of The Music Academy Of The West